Parylene conformal coating is becoming an ever increasing part of everyday life for the defense, bio-medical, and other industries.

A question we often get is "What can be parylene coated?" We are often amazed at the shear number of items that can be and are coated with parylene. A quick look at the different items that we have parylene coated over the years reveals that more often than not, parylene coating is a value add to these and many more products:

This is far from a comprehensive list of items that can be parylene coated, but it should give a good idea how many different applications that parylene can be used for.

Military and defense equipment are put to the test and subjected to uniquely harsh conditions on a daily basis. These mission-critical products must be rugged and able to withstand extreme weather and temperatures, exposed forces of gravity that are well above and beyond normal situations, and a range of contaminants such as salt, water, and fungus. Luckily, the application of a parylene conformal coating to relevant electronics can ensure that components are fit for duty in the military and defense industries. 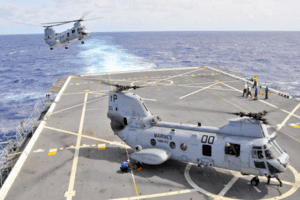 Conformal Coatings: To Protect and Serve
A conformal coating encapsulates electronic printed circuit boards (PCBs) and other critical components to protect them from such factors as outside elements, physical damage, and hazardous chemicals. Conformal coatings also boast good dielectric properties; they protect the coated component from outside interference and signals, but also help to insulate the parts on the PCB and the etched traces from each other. This ultimately allows for a smaller board as well.

Parylene's Unique Benefits
Conformal coatings can be made from a range of different compounds, but none has the unique benefits of parylene. Parylene is deposited as a vapor at room temperature, protecting temperature- and chemical-sensitive components from damage during the coating and curing process. It can withstand extreme temperatures. Parylene is also hydrophobic and can withstand a 100-hour salt spray test, which exceeds the MIL-STD-810F ruggedization standard.

In addition to its strength, parylene is both light and thin. It can completely permeate a space as small as 0.01 mm. The conformal coating is also pinhole-free at 0.5 microns. In military applications, where controlling component size and weight are important considerations, parylene is the most-efficient conformal coating material available.

Unlike other conformal coatings, parylene adheres mechanically, rather than chemically, to a given substrate. This attribute means that it can be used to coat a wide range of materials. And while cleaning the substrate is a key part of achieving a successful coating, the application of A-174 silane can further promote improved adhesion.

Military Coating Applications
Military electronics are frequently protected by conformal coatings. These coatings are so effective that, in many cases, they make commercial off-the-shelf components safe for use in military settings. Some real-world military applications include:

Offering sensitivity and performance in a compact package, microelectromechanical systems (MEMS) have become increasingly prevalent in U.S. military applications over the last few decades and are enabling significant technological advances. As with all things military, however, robust protection of these sensitive electronics is imperative in order to ensure that they can withstand the harsh conditions often found on the battlefield. Conformal coatings such as Parylene can help MEMS-based military technologies withstand conditions such as extreme temperatures, humidity, dust/dirt, chemicals, and rugged terrain.

Because of the exciting advancements it allows, MEMS technology is the subject of a great deal of military R&D. MEMs sensors typically outperform those that are made on the “macro” scale, which makes them not only more efficient, but cheaper to manufacture in bulk as well. Cheaper and more efficient are certainly attractive options that the military looks for when developing or adapting new technology such as MEMS for weapons platforms, communications systems, or sensor suites designed for multiple uses.

With the onslaught of improvised explosive devices (IEDs) being implemented on the battlefield over the last decade, researchers have been tasked with designing new portable ‘bomb sniffing’ devices, for example, that are able to pinpoint hidden explosives buried under different substrates such as dirt, concrete, and asphalt. Scientists have even succeeded in developing a MEMS-based device that allows soldiers to detect explosive compounds as well as volatile organic compounds and chemicals based on gas chromatography (GC) and surface acoustic wave (SAW) detectors. Developed by scientists from Sandia National Labs, the mini-PDID (Pulsed-Discharge Ionization Detector), for instance, has shown that it is capable of not only detecting explosive compounds, but also detecting human odors, bacteria, pesticides, and carbon dioxide/monoxide gas as well as a host of other organic compounds.

The military is also interested in radiofrequency (RF) MEMS microtechnology for use in satellite and wireless communications, which theoretically could have data transfer speeds in excess of 100 GHz when coupled with laser optics. Soldiers on the ground will greatly benefit from RF MEMS technology, which is incredibly important in combat where real-time information is crucial. Current communications devices are used to transmit classified voice communications only and are widely known to be limited when it comes to interoperability; however, RF MEMS are not restricted to that limitation and, in fact, can provide much more in terms of functionality.

Boston MicroMachines has developed a working prototype radio, known as SCOUT (Secure Communicating Optical Ultra-small Transponder) that was originally designed to provide soldiers with an accurate IFF (Identification- Friend or Foe) system to prevent fratricide; however, they soon found that the device was capable of handling that task and delivering line-of-sight communications in much the same fashion as current military radios. The SCOUT transponder, however, has greater range and increased communications speed than that of conventional radios and is both smaller and lighter in weight as well. The key to that transponder is a modulated retroreflector, which is a MEMS-based deformable mirror that modulates light along with an optical device that sends that light back to the point of origin.

With more MEMS and nanotechnology being implemented into such novel new devices, developers often turn to conformal coatings, such as Parylene, to protect their microelectronics’ delicate moving parts, ensure reliability, and allow long life. The coating acts as a force field of sorts against such hazards as moisture, chemicals, dust, and temperature extremes without impeding movement or function. The coating is also often used in conjunction with hardened and rubberized outer casings to compensate for impacts, such as being dropped, that render the device inoperable.

In addition to protection of these critical components, Parylene conformal coating offers the benefit of offering performance in a thin film. In turn, the coating adds negligible weight and stress to the substrate—a critical feature for MEMS, in particular.

Suffice it to say, without the protection of Parylene or other conformal coatings, MEMS-based technology for military applications could be limited in scope, job function, or feasibility. Instead, Parylene helps to enable the realization of innovative, useful, MEMS-based military technologies that help keep us safe.

Parylene Varietals: Matching Material to Purpose
A common generic name for Poly-para-xylylene, parylene forms a protective plastic film when applied to substrate surfaces. Application is achieved through a chemical vapor deposition (CVD) process in a vacuum, as a gas to targeted substrate surfaces.

Different types of parylene include N, C, D, HT, AF-4, and F; each has a specified utility distinguished by different chemical, electrical and physical properties. Depending on the specific use, parylene conformal coatings can be effective in the range of 0.1 - 76 microns' thickness, far finer than liquid coating materials. 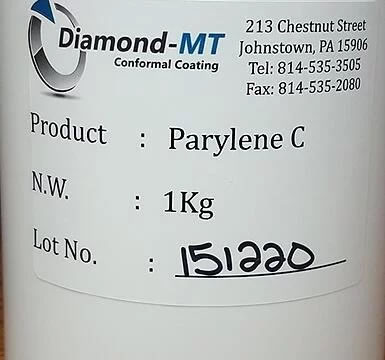 Types of Parylene
Among the prominent parylene types are:

Conclusion
Parylene condenses on substrate surfaces in a polycrystalline fashion, generally through vacuum CVD. The result is a truly conformal and pinhole free protective substrate coating. Parylenes N and C account for the majority of parylene’s current commercial applications. In comparison, deposition rates for other parylene types are significantly slower, diminishing productivity while increasing cost.

Conformal coating of an object occurs when an appropriate coating material is applied on-top and around an underlying substrate, to protect it from such environmental and performance concerns as chemical incursion and excess moisture. Liquid organic polymer conformal coatings – acrylic, epoxy, silicone and urethane – prevent: 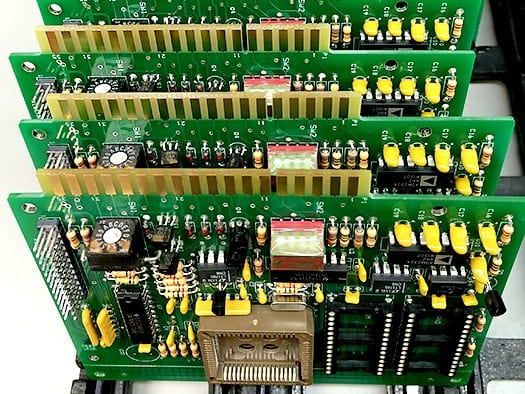 Conforming accurately to the physical configurations of the exposed face of the assembly, liquid conformal coatings provide reliable protection for PCBs. Regardless of the material, liquid coatings are applied mainly by three methods:

Liquid applications generate a comparatively thick coating-layer, which can be useful for insulation and protection, but undesirable when applied to thinner PCB assemblies.

In comparison, a fifth conformal coating type – parylene. a poly (p-xylylene) polymer – is not liquid, with film thicknesses controllable to less than a single micron (1 μm). Deposited from the vapor phase, parylene polymers are formed measuring 0.1 torr (0.000133322 bar), where the average smallest path between the molecules is in the order of 0.1 cm.

CVD vacuum polymerization converts chemically inert, powdered parylene dimer (an oligomer consisting of two structurally monomers) into a gaseous form at ambient temperature and at the molecular level, in a vacuum. Quantitative cleavage (pyrolysis) of the vaporized dimer vapor at 680 ºC yields the stable monomeric diradical, which spontaneously polymerizes onto the substrate upon entering the deposition chamber. CVD produces consistently pinhole-free conformal films that penetrate even the smallest surface crevices, tightening all areas on multi-layer elements with uniform coating, on a molecule-by-molecule basis. The outcome is exceptional surface adhesion for virtually any board topography; crevices, gaps, sharp edges and surface roughness are covered and sealed.

The result is a durable, transparent polymerized film successful in the nanometer range, conformally coating all regions of a component, with exceptional performance ratings compared to liquid coatings. Defects common to liquid coatings are eliminated, including:

Each coating material offers distinct advantages and disadvantages, dependent upon their chemical/mechanical properties, deposition method, interaction with substrate materials, and re-workability. Parylene alone can conform to any surface with micro-thin coating, while retaining an exceptional range of performance advantages unavailable with liquid coatings.